Christmas is fast approaching.  It’s typically a time of year that I look forward to. I usually love shopping, picking out things that I think are great gifts, decorating and baking.
This year however, is quite different.  Skipping Christmas entirely sounds more like my cup of tea. I miss Cayden right now so much it physically hurts. You know that feeling you get in the pit of your stomach, like when you hit a big drop on a roller coaster? That’s the feeling I get every time the thought that she’s “actually gone” registers again in my mind.
This year I was looking forward to doing all of the really fun holiday activities with her. I searched on Pinterest for the best Elf on a Shelf ideas.  This year she was finally old enough to really get into Santa and Christmas and asking for presents. I’m sure I was more excited than she was to get to wake up Christmas morning and find the presents she specifically asked for under the tree.
Sadly, she will not have Christmas with us this year.  I didn’t even put up a tree, wrap presents or put any decorations up this year.
On November 22nd Brent and I took her to the Grand Illumination Parade in downtown Norfolk. I’m so very glad we got the opportunity to take her this year.  While we were waiting for the parade to start, someone passed out a list to the children so they could write their name, address and their Christmas wish list down to give to Santa. After the parade we also had tickets to see Santa himself!
Cayden was excited that entire day. She told me over and over again what she was going to ask Santa for. She wanted a pink snake, a guitar, a flute, an Elsa baby doll and a powerwheels car.  She screamed with excitement when I told her Daddy was on his way home and we would be headed to the parade soon.
Below are some pictures from the parade that night. Her holding her list she put together for Santa is one of my favorites.
After the parade that night, Brent and I came home and ordered everything she specifically asked Santa for.  Its been hard in the last couple weeks to call and ask to return these items because we no longer need them.
I know Cayden is in Heaven now, and she wants for nothing.  I’m sure she is up there waiting for Santa and she knows she will get everything she asked for.  I only wish I could be there to see her open her gifts. 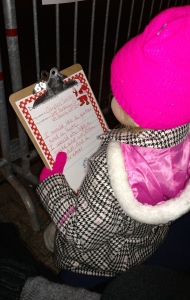 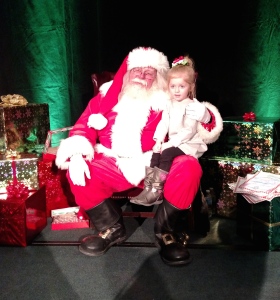 6 thoughts on “The Holidays”